In the summer of 2020, an 82-year-old male presented to the emergency department to evaluate right foot pain and swelling over the past week. He saw his primary care physician earlier in the morning, who referred him for more emergent evaluation. He states he fell at home one week ago, injuring his right foot. This initially resulted in minimal pain, but over one week, the pain and swelling continued to worsen. He notes that he had no open wounds or active bleeding at the time of the initial injury. However, over that week, in addition to the escalating pain and swelling, he developed a bleeding ulcer on the dorsal aspect of the right foot. He could stand and ambulate, albeit with discomfort. He states that weight-bearing and ambulating for prolonged periods exacerbate his symptoms. He notes that the pain today is moderate and that he has not tried any therapy to relieve his pain besides rest, which only marginally helped. The worsening pain, swelling and bleeding prompted his visit to his primary physician. 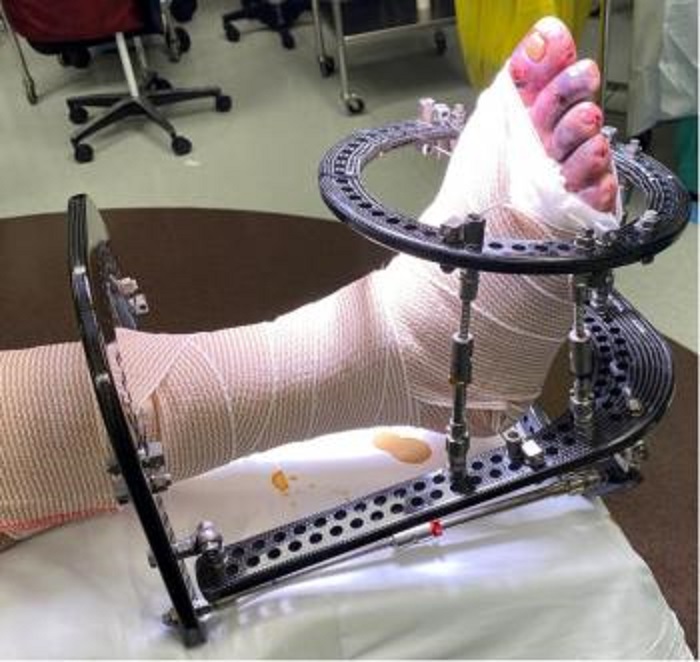 The patient’s past medical history was significant for benign essential hypertension, hypothyroidism, benign prostatic hypertrophy without obstructive symptoms, and idiopathic neuropathy. His past surgical, family and social histories, along with his allergies were all unremarkable. The patient’s medications included doxazosin 2 mg by mouth twice a day, lisinopril 20 mg by mouth once a day, and levothyroxine 50 mcg (0.05 mg) by mouth once a day. The patient had no other associated symptoms or findings upon review of symptoms, aside from those from the past medical history. Wound cultures revealed colonization by Pseudomonas spp. susceptible to ciprofloxacin. Laboratory examination was normal, and in fact, the ED physician initially had concerns for possible compartment syndrome. Examination revealed a foot that was cool to the touch, with non-blanchable erythema, crepitus and a fully mobile LisFranc joint.

Pertinent Points in The Treatment Course
The patient has no prior incident of Charcot neuroarthropathy, and it is important to note that the patient does not have diabetes, but has idiopathic neuropathy. We discussed multiple points with the patient, including the neurovascular insult as well as the neuropathic dislocation. We also discussed the active soft tissue necrosis and the likelihood that the dislocation itself was present for greater than just that week with soft tissue contracture. We felt it necessary to explain to the patient that at this point, in our opinion, it was unlikely that his foot would reduce in a manner that would lend itself to normal anatomy. The goal, ultimately, would be to establish a plantigrade foot. We discussed the high probability of a below-knee amputation due to multiple factors, including the current state of the foot. The patient voiced understanding of the situation, and expressed that he wanted to try all possible options to save his foot. He explained the importance of performing his normal daily activities, including transferring around his home. Two recurring themes we note when considering treatment of Charcot neuroarthropathy are setting appropriate patient expectations and understanding the patient’s needs. These two concerns are very intertwined and in our experience, can dictate the treatment plan going forward. In this case, the patient did not have diabetes, had low metabolic demands, and we felt saving his foot would likely increase his quality of life.

The patient underwent Charcot foot reconstruction on the right foot with application of a Stryker triplanar external fixator. There was a significant component of laxity noted with attempts at closed reduction. However, due to the significant dislocation and length of time of presence of the deformity, it was immediately apparent that reduction would not be simple.

Despite the compromise of the soft tissue envelope structural integrity, it was necessary to make multiple incisions to achieve relative reduction. There were three incisions in total: the first incision along the medial column; the second lateral to the second metatarsal base; and the third between the fourth and fifth metatarsal bases. Even with this adequate exposure, the foot could not adequately reduce in the sagittal plane. Multiple osteotomies across the tarsometatarsal joint with overall shortening achieved the desired reduction. Temporary pinning-maintained position.

We then assembled and affixed a Stryker butt frame to the right lower extremity. Utilizing the concept of the butt frame along with the dynamic struts, we achieved stability to the rearfoot and further dialed in the correction of the forefoot utilizing the forefoot ring and struts. The patient remained pain-free and was discharged home with home health and oral antibiotics per infectious disease recommendations. The goal was to have him remain in the external fixator for three months for consolidation and further soft tissue healing. Discoloration to the distal toes improved exponentially after surgical reduction, and the toes returned to a more normal appearance. The patient followed up routinely every week with further necrosis and soft tissue demarcation, especially at the dorsal aspect of the foot and the medial column. He underwent gradual, weekly debridement with further soft tissue demarcation and evidence of viability of the underlying tissue noted to the dorsum of the foot. However, the medial column gradually worsened, and at the five-week mark, there was exposure of the medial cuneiform bone. We decided to take him back to the operating room. Though the patient had been very adherent with his care, surgical debridement of the bone and potential hardware removal would be necessary.

Six weeks after Charcot foot reconstruction, the patient returned to the operating room. We removed the external fixator and debrided the nonviable tissue. Debridement of the medial cuneiform revealed it to be soft. The overall architecture of the foot was such that the medial cuneiform was very prominent in an area of extensive soft tissue necrosis. We decided to remove the cuneiform and send it for pathology. He underwent pinning of the tarsometatarsal joint, and remained non-weight-bearing. Additionally, we debrided the remaining wound and applied a Stryker ProLayer® acellular dermal matrix. The pathology report was positive for osteomyelitis to the medial cuneiform. The patient had a PICC line placed for six weeks of IV antibiotics, per infectious disease recommendations. Postoperatively, the patient continued to improve. The graft and the pins remained in place for one month; then, we decided to take him back to the operating room for additional debridement with a second graft application. We removed the second graft five weeks after its application. The patient had been weight-bearing as tolerated in a CAM boot during that time.

Weekly local wound care continued with no further grafting. He transitioned back into a standard shoe for transfers around his home. His wound healed 10 weeks later.

In Summary
The total time to heal for the patient was eight months. He underwent a total of three surgeries. The patient has a brace and a boot but admits he just wears a slipper in his home and is fully ambulatory for transferring with an overall low activity level. Ultimately, the patient is very happy to have his foot. The osseous anatomy remains flexible, and he has no pre-ulcerative areas of concern.

Dr. Troxell is a podiatrist with Bay Area Orthopaedic Specialists in St. Petersburg, FL. He is a staff physician with the St. Petersburg Innovative Foot and Ankle Surgery Fellowship program

Dr. Mohammad Abuamaish is a first-year podiatry resident with the James A. Haley VA in Tampa, FL

Bay Area Orthopaedic Specialists provides information and articles as a service to our readers. No content on this site, regardless of date, should ever be used as a substitute for direct medical advice from your doctor or other qualified clinician. This blog provides general information and discussions about health and related subjects. The information and other content provided in this blog, or in any linked materials, are not intended and should not be construed as medical advice, nor is the information a substitute for professional medical expertise or treatment, If you have a medical concern, you should consult with your health care provider or seek other professional medical treatment. If you think you may have a medical emergency, call your doctor or emergency services immediately. The opinions and views expressed on this blog and website have no relation to those of any academic, hospital, health practice or other institution.
https://www.bayareaorthofl.com/wp-content/uploads/2021/12/Limb-Preservation-Troxell-2.jpg 1011 1231 wpbayarea https://www.bayareaorthofl.com/wp-content/uploads/2018/05/Bay-Area-Orthopaedic-Specialists.png wpbayarea2021-12-03 16:35:492022-01-12 09:05:57A Challenging Case of Limb Preservation for A Patient with Neuropathic Pedal Dislocation

Our Latest From The Blog